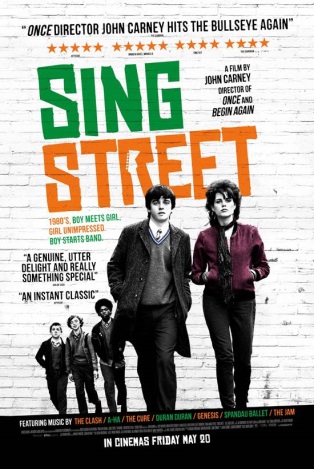 ‘Sing Street is an Irish music drama, set in Dublin in the 1980s, in which a fifteen-year-old schoolboy escapes his strained family life by starting a band to impress the mysterious girl he likes while dreaming of moving to London.’

‘The film received positive reviews from critics, grossed $13 million worldwide and was nominated for Best Motion Picture – Musical or Comedy at the Golden Globes. The film also features music of the period from The Cure, A-ha, Duran Duran, The Clash, Hall & Oates, Spandau Ballet, and The Jam.‘ – source: wikipedia

‘When it comes to capturing the strange, romantic magic of making music, few modern film-makers are more on the money than John Carney. […] As Carney has proved previously, he knows how to straddle the line between the sound in the room and the sound in your head – a sequence that segues from bedroom composition to living room rehearsal (with tea and biscuits) to full studio production perfectly negotiates the space between kitchen-sink realism and musical fantasy in which this lovely, lyrical movie casts its spell. […] Happy sad indeed. I laughed, I cried, I bought the soundtrack album.‘ – source: Mark Kermode in The Observer