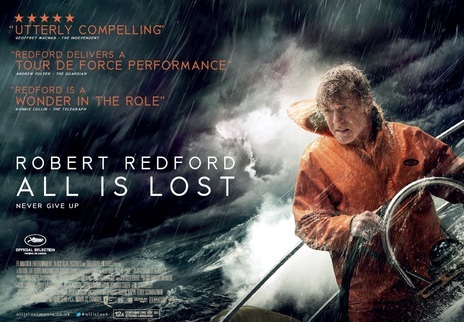 During a solo voyage in the Indian Ocean, a veteran mariner (Robert Redford) awakes to find his vessel taking on water after a collision with a stray shipping container. With his radio and navigation equipment disabled, he sails unknowingly into a violent storm and barely escapes with his life. With any luck, the ocean currents may carry him into a shipping lane – but, with supplies dwindling and the sharks circling, the sailor is forced to face his own mortality.

Celebrating the career of one of Hollywood’s all time greats and coinciding with his stated intention to retire from acting after his final movie, The Old Man & the Gun, is released later this month, we are honoured to bring one of the last of Robert Redford’s great acting roles to our local pop-up cinema, the stunning All Is Lost, for which he was nominated for his own Golden Globe and won the New York Film Critics Circle Award for Best Actor, among other honours awarded to the film. – Sources: Google, Wikipedia