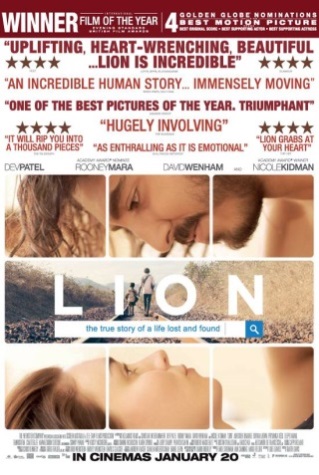 ‘In 1986, Saroo was a five-year-old child in India of a poor but happy rural family. On a trip with his brother, Saroo soon finds himself alone and trapped in a moving decommissioned passenger train that takes him to Calcutta, 1500 miles away from home. Several years later, Saroo finds himself plagued by his memories of his lost family in his adulthood and tries to search for them even as his guilt drives him to hide this quest from his adoptive parents and his girlfriend.’

‘In a time where diversity is being talked about more in the film industry, LION makes a compelling case for having diversity in storytelling. It is a personal story unique to South Asians growing up in India, and it’s refreshing and easily one of the best films the year has to offer. Don’t dismiss this as yet another Oscar bait movie – it probably is one. But the film is much more than that. With a distinct vision from director Garth Davis, LION offers an enthralling story that deserves to be seen by everyone.‘ – source: imdb.com