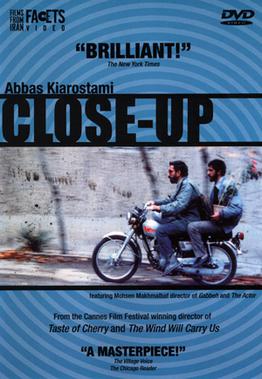 ‘Close-Up is a 1990 Iranian docufiction written, directed and edited by Abbas Kiarostami. The film tells the story of the real-life trial of a man who impersonated film-maker Mohsen Makhmalbaf, conning a family into believing they would star in his new film. It features the people involved, acting as themselves. A film about human identity, it helped to increase recognition of Kiarostami in the West. Many critics consider Close-Up a masterpiece of world cinema; in the 2012 Sight & Sound poll, it was voted by critics onto “The Top 50 Greatest Films of All Time” list.’

‘Close-Up is based on real events that occurred in Northern Tehran in the late 1980s. Kiarostami first heard about Sabzian in 1989 after reading about the incident in an article in the Iranian magazine Sorush by journalist Hassan Farazmand. Kiarostami immediately suspended work on the film project that he was in pre-production of and began making a documentary on Sabzian. Kiarostami was allowed to film Sabzian’s trial and also got Sabzian, the Ahankhahs and Farazmand to agree to participate in the film and to re-enact incidents from the past. Kiarostami also arranged for Mohsen Makhmalbaf to meet Sabzian and help facilitate forgiveness between Sabzian and the Ahankhahs.‘ – source: Wikipedia